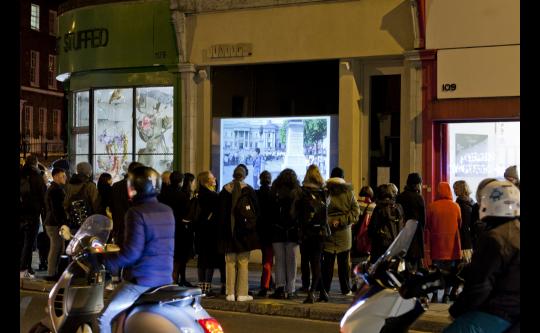 Tintype is pleased to announce the sixth edition of its Essex Road program. Once more, it sees eight artists invited to make a short film in response to the eponymous, mile-long North London thoroughfare that snakes through Islington from Angel to Balls Pond Road, and where the gallery is also located.

The annual commission is recognised for its significance within the ecology of moving image arts in the UK, enabling eight artists each year to create new work. Since its inception six years ago, Tintype has commissioned 48 artists’ films, including works by Benedict Drew, Melanie Manchot and John Smith. These are back-projected into the gallery’s window and viewed from the street as a form of public art.

The driving force behind the project is the desire to work with outstanding artists, producing new work that is shown in an unusual context. Whilst the brief is very simple – to make a short film that responds to one London street – the results have been astonishingly diverse. Turning a prism onto a very specific locale has, perhaps counter-intuitively, encouraged a magnificently adventurous response.

For ESSEX ROAD 6, Tintype’s large window, situated on a busy corner in Essex Road, becomes a public screen for five weeks with the eight films screened on a loop every evening from 5 – 11pm.

AYO AKINGBADE’s Hella Trees was filmed in the Colebrooke Row and Duncan Terrace Gardens, south of the Angel. It follows a young obsessive, Rafiki, whose artistic practice focuses on trees, their individuality and presence. The film segues into a laconic conversation about identity and wanting to confound stereotypes, inviting people to look closer and go beyond the obvious.

Ayo Akingbade is a young artist based in London. Her work to date has emerged from and mediates the urban environment, which she distils into highly personal, idiosyncratic narratives. She recently completed a social housing trilogy entitled No News Today. She is a recipient of the 2018 Sundance Ignite Fellowship and last year her work was selected for New Contemporaries.

ADAM CHODZCO’s film is entitled Fluid Dynamics; The Quail is Rising. Under Essex Road flows the remains of the New River, a project from the early 17th century to bring fresh water to London. From its traces a dream flows; a ship, TS Quail (a secluded purpose-built space for Islington Sea Cadets, soon to be relaunched) has become stuck in a glitch in the present whilst its crew try to navigate it along the New River’s subterranean channels. This crew simultaneously haunt the TS Quail’s sister ship, the destroyer HMS Quail (adopted by the people of Islington in 1942) whose wreck lies on the seabed in the Gulf of Taranto. Their actions restore a state of liquidity and in the future the New River resurfaces in a completely rewilded Islington.

Adam Chodzko works across media, exploring our conscious and unconscious behaviour, social relations and collective imaginations through artworks that are propositions for alternative forms of ‘social media.’ His work speculates how, through the visual, we might best connect with others. Since 1991 Chodzko has exhibited extensively in international, solo and group exhibitions. In 2002 he received awards from the Hamlyn Foundation and the Foundation for Contemporary Art, New York, and in 2007 was awarded an AHRC Research Fellowship in the Film Department at the University of Kent, Canterbury. In 2015 Chodzko was shortlisted for the Jarman Awards. In 2016 he received a DACS Art360 Award.

In PATRICK GODDARD’s film Black Valuation Halloween and the ghouls come out. Patrick Goddard, impersonating the supposed recent inheritor of the Tintype gallery building, has the property valued by an unsuspecting estate agent. Having convinced the agent earlier in the day that he would have to dash off to a Halloween party straight after their meeting, Goddard conducts the consultation