The Three Princes of Serendip with (Private View) 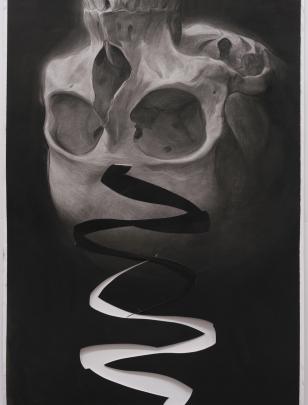 The Three Princes of Serendip

Spectral figures float against shadowy backgrounds as if emerging from dust or smoke. These are the surreal, monochromatic visions of Berlin-based artist Ruprecht von Kaufmann, who returns to the medium of drawing for his latest solo exhibition entitled The Three Princes of Serendip at Kristin Hjellegjerde’s gallery in Wandsworth, London. Rising out from the artist’s marks with charred wood-dust on white paper, each scene appears caught in a state of constant becoming.

The exhibition takes its name from a Persian fairy-tale and whilst von Kaufmann’s images make no direct reference to the story’s narrative, his work functions as a kind of visual fairy-tale in which the viewer is welcomed into a phantasmal world where the lines between reality and imagination are blurred. This blurring extends to the artist’s practice in which blends drawing with a sculptural approach, and an exploration of the three-dimensional. This series, for example, is directly inspired by Greek sculpture, but in contrast to the static durability of marble, von Kaufmann’s figures are soft edged and rippling with the ghostly presence of the artist himself. ‘By using just your hands you can slowly pull an image out of the fog of grey that first envelopes the paper to create a sense of space and movement,’ commented von Kaufmann. On a metaphorical level, the fog becomes the imagination from which both images and stories are drawn, making the act of creation itself seem otherworldly, almost unconscious.

We are given a sense of the images emerging before our eyes from the deep, absorbent black of the charcoal. The contrast of white and black conveys a spaciousness, which seems to expand beyond the dimensions of the paper to suggest a continuation. It is this space that invites the viewer to engage creatively. ‘Much of what we read in a drawing as sky, soil, air space, fabric or human flesh is just changing patterns of light and darks that are pieced together by our brains into things that we recognise. This becomes incredibly tangible in charcoal drawings. Like in a good Chinese ink drawing, the viewer experiences a sense of colour and texture in the black and white image. It's the pure power of suggestion,’ said the artist.

The use of monochrome also emphasises further contrasts in the work: fragility and strength, depth and lightness, creation and destruction. Two of the images, for example, have been partly shredded as if the artist contemplated their decomposition only to find that through destruction something new has been created.