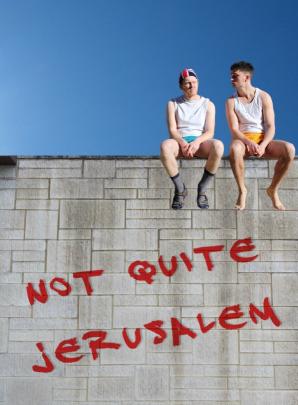 Previews (3 and 4 March) £14 all seats.
£10 tickets for Under 30's for performances from Tuesday to Sunday of the first week when booked online only.
£14 tickets for local residents

Not Quite Jerusalem by Paul Kember

“All I’m talking about is this. Democracy. Having a say in your own affairs. Taking decisions about your own lives ...It’s not like that in England.”

It's 1979, and Mike, Carrie, Pete and Dave have fled grim, divided England for the sunshine, sex, beer and bagels of a Israeli kibbutz. Only to find that what was supposed to be a working holiday is more like hard labour in 100-degree temperatures.

Pete and Dave soon alienate themselves with their foul-mouthed, high-spirited behaviour. Carrie desperately tries to fit in, but cannot relate to either her fellow-countrymen or the Israelis. Only Cambridge drop-out Mike seems able to articulate what it means to be young, conflicted, English, and a very long way from home. Until, that is, he meets no-nonsense kibbutznik Gila…

First presented at the Royal Court Theatre in 1980 where it broke box office records and revived there in 1982 (with casts including David Threlfall, Phil Davis, Kevin McNally, Selina Cadell and Bruce Alexander), Not Quite Jerusalem won first-time playwright Paul Kember the Evening Standard Most Promising Playwright Award.

“More salient points about our attitudes to each other, to foreigners, and to ourselves, than any play I’ve seen in years… Sharply observant…very funny.” Time Out

“A stunningly promising debut…Packed with honest observation and comic detail… a lovely study of post-adolescent uncertainty.” The Guardian