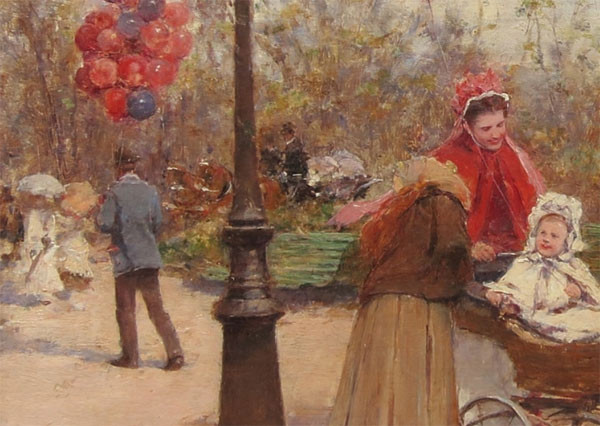 Ad
Covid 19 Information
Due to the Covid 19 restrictions, the exhibition is by appointment only.
When

Colnaghi, London, is delighted to present a survey of painting by Spanish artists of the late nineteenth and twentieth centuries, opening 3 July 2020. The Golden Age of Spanish Modern Art comes at a time of renewed interest in this period, and follows exhibitions appraising ‘Catalan Modernisme’ at the Metropolitan Museum of Art, New York, the Cleveland Museum of Art, and the Van Gogh Museum, Amsterdam. Many of the featured artists, amongst them Ramon Casas, Francesc Miralles and Joaquim Sunyer, moved from Barcelona to Paris, and the exhibition seeks not only to examine the impact of this on their work, but to also re-evaluate and acknowledge their contribution to the canon of Modern Art.

To realise this presentation, Colnaghi, London (est. 1760), has collaborated with two of Barcelona’s most influential and venerable galleries, Sala Parés (est. 1877) and Artur Ramon Art (est. 1911), combining more than five hundred years of collective knowledge and experience. The Golden Age of Spanish Modern Art is comprised of fifteen works by twelve artists. All of them trained at the art academies of Barcelona, but, as with Picasso, many were drawn to Paris, at the time the epicentre of the artworld.

The variety of styles and techniques presented here attest to their absorption within the city and the influence of their peers and contemporaries. For example, Joaquim Sunyer’s Cabaret scene in Paris (1904), a pastel work depicting a singer on a stage, echoes the work of French caricaturist Honoré Daumier, while one of the figures, tall and thin, is reminiscent of the alluring women painted by Hermen Anglada Camarasa in his nocturnal scenes. The work belongs to the artist’s youthful period spent in the French capital, and the influence of Toulouse Lautrec and Théophile Steinlen — two major influences on young Spanish artists like Picasso and Sunyer — is evident. A more genteel aspect of city life is revealed in Francesc Miralles’s Into the Park. Paris, Bois de Boulogne (ca. 1895-1896). In this painting, a nanny walks a child with a cart while two elegant women walk in front of her. The viewer is transported to the Bois de Boulogne which was transformed into a leisure park by Napoleon III in 1852. The work is a fine example of Miralles’s signature style, combining fresh colours with a depiction of bourgeoise life, demonstrating his connection with the work of modern artists and his awareness of the Impressionists.

Sant Hilari (1882) by Ramon Casas, is a key work for understanding the pictorial evolution of the artist. It was the first painting that he presented to the public in a gallery and perfectly exemplifies the experimental capacity of a young artist of just sixteen. The landscape is presented in a vertical format and is constructed from loose and spontaneous brush strokes, referencing Jean-Baptiste-Camille Corot’s compositions.

As in Corot’s works, Casas captures the lushness of the forest, achieving depth from different areas of light resulting from the freedom and speed of the brush. The scene is enlivened by the small figure of a donkey whose details in red and blue add dynamism to the picture. Says Colnaghi Gallery’s CEO, Jorge Coll: ‘In staging this exhibition, we are seeking to reconstruct the local Spanish art scene at the turn of the 20th century.

Many of these artists are relatively unknown to the rest of the world, and we hope that this exhibition will help bring them to wider public recognition and restore the prestige of arguably one of the best schools of painting in Europe.’ Featured artists: Alfred Sisquella | Antonio Fabres y Costa | Francesc Miralles i Galaup | Joaquim Sunyer | Joaquim Mir | Josep Maria Tamburini i Dalmau | Laureano Barrau | Lluis Graner i Arrufi | Marià Fortuny | Miquel Villà i Bassols | Modest Urgell | Ramon Casas i Carbó All images courtesy of Colnaghi.