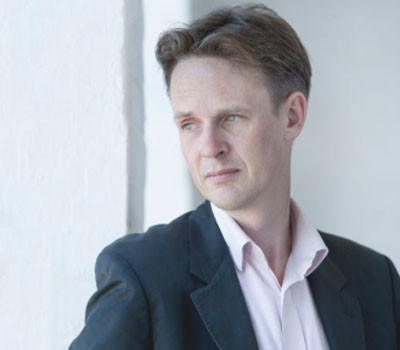 From Wednesday 8 July, a full video archive recording of the Barbican’s 2013 multimedia staging of Benjamin Britten’s Curlew River in the atmospheric setting of the church of St Giles’ Cripplegate will be available on our Read, Watch & Listen page for a limited time.

This innovative production of Curlew River, the first of Britten’s three Church Parables, was staged by multimedia director and video artist Netia Jones, and featured a British cast led by tenor Ian Bostridge as the Madwoman, alongside Gwynne Howell, Mark Stone and Neal Davies, who were joined by Britten Sinfonia and Britten Sinfonia Voices.

The three sold-out performances of Curlew River received great critical acclaim and formed part of the Barbican Britten festival in November 2013, celebrating the English composer’s centenary. An adaptation of the 15th-century Japanese Noh play Sumidagawa (Sumida River) by Juro Motomasa, Curlew River was written following Britten's first encounter with the austere and ritualized Noh theatre when on tour in Japan. While the story of Curlew River closely follows the Japanese original, Britten and his librettist William Plomer transferred the action of the play to medieval East Suffolk and gave it a specifically Christian context by introducing plainchant to open and close the work.

A strange encounter between a Japanese aesthetic and a medieval mystery play, it is a work of profound emotional impact, exploring the themes of community, suffering and redemption through the figure of the Madwoman and the loss of her child. Netia Jones’ choice of contemporary costumes, an incense-filled nave, the abstract, minimalist staging and haunting monochrome projections of shingle, flowing water and birds onto a blank white stage and sail, distilled the work to its essential elements. The aesthetic was the Japanese one of contrast: black and white; sound and silence; darkness and light; grief and enlightenment. Curlew River was a co-production between the Barbican Centre, London, Lincoln Center New York, Carolina Performing Arts and CAL Performances Berkeley. It was presented by the Barbican and performed in November 2013 at St Giles’ Cripplegate, London, by arrangement with Faber Music Ltd, London.