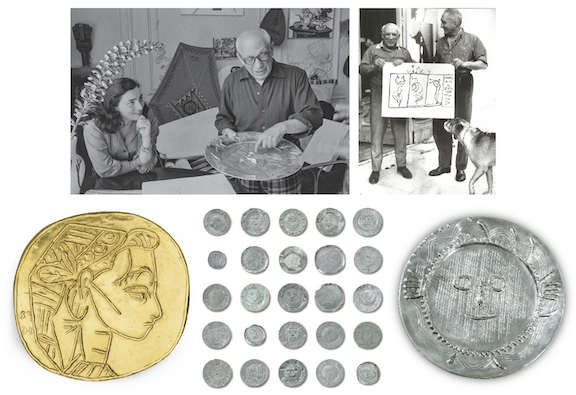 Masterpiece Art is delighted to present an exhibition featuring a rarely seen full-set of twenty-four limited edition silver platters — the fruits of a collaboration between Picasso and the celebrated Ateliers Hugo, Aix-en-Provence, France. Each of the limited-edition works feature a different
design, which draw upon three recurring themes in the Spanish artist’s oeuvre — bullfighting, Jacqueline Roque and Henri Matisse.

In anticipation of interest — a full-set never being publicly exhibited before in the United Kingdom – the show will run from 19 November 2020 until 20 February 2021.

Says Executive Gallery Manager and Sales Director, Alex Cousens: ‘Picasso’s ceramic work is well known and justly celebrated, but his collaboration with François Hugo was hugely important to him. He took a deep interest in the creation of these platters, the problem-solving nature of the collaboration and this challenging new medium. We are privileged to be able to bring together under one roof an entire edition of these sublime artworks, along with many other rarities. The photography of Edward Quinn is particularly evocative of Picasso, and offers a sense of time and place, especially as it shows Picasso enjoying his platters at Villa La Californie.’

Showing alongside the platters, another UK debut, will be an incredibly important twenty-fifth platter, a ‘progenitor’ platters once belonging to Picasso and acquired from his descendants. This silver platter, Visage aux Mains, stamped Empreinte Originale like the ceramics, hails from the small number of silver platters made for Picasso’s personal collection between Dec 1956 – March 1958. Further supplementing this will be gold medallions and a full-size gold platter from the collaboration, a set of 13 gold bijoux by Jean Cocteau and François Hugo, comparative ceramic platters, archival materials, as well as photography by the famed Irish photographer,
Edward Quinn.

Picasso created a large volume of ceramics and crockery in numbered editions, but only issued silver platters in 24 designs throughout his entire oeuvre, designing an even smaller number of pieces in gold. Conceived between 1956 and 1961, the platters were designed by Picasso and executed by acclaimed French silver and goldsmith François Hugo. All works were handmade in the repoussé technique by François and his son Pierre Hugo; the limited editions were produced in and edition of twenty, plus 2 ‘artist’s proofs’ for each Picasso and Hugo, as well as six Hors de Commerce, each piece stamped accordingly.

His versatile body of work and career as a painter, sculptor, ceramicist and even stage designer was crucial to the development of modern art. A prolific artist throughout his long life, Picasso worked with an endless variety of subjects and motifs across mediums and artistic styles – he was particularly explorative around the conception of the Hugo collaboration, experimenting with an unprecedented number of new art forms in these immediate years at Villa La Californie.

Ceramic works are an integral part of his artistic output and the silver platters link to his ceramics in more than just their design. Picasso was first introduced to the medium of ceramic in 1946 when he visited the annual potters’ exhibition in Vallauris, France, a centre for the production of pottery dating back to the Roman era. The visit incited a lifelong passion for and dedication to ceramics, a medium that he tackled with sensitivity and creative imagination rivalling those seen in his celebrated paintings, drawings and sculptures.

During the 1950s and 60s, Picasso commissioned François Hugo, a master-craftsman himself and great-grandson of the eminent French writer Victor Hugo, to execute a series of platters, dishes, medallions and statuettes in precious metal after the artist’s designs first conceived in ceramic. Foreseeing a clear vision of the finished work, Picasso was highly instructive on what end product he desired, allowing Hugo to utilise his varied skillset and ingenuity to tackle the practical issues that arose from these demands.

When the first platters were completed, Picasso originally intended to keep them for himself and resorted to hiding them from the public, occasionally showing them to a few friends who visited his studio. Even after the artist had at last, in 1965, authorised François Hugo to make a small, numbered edition of each platter for sale, the specimens were limited to a small circle of connoisseurs and friends. They were discretely sold through Jean Hughes, proprietor of the gallery Le Point Cardinal in Paris, where for the first time in 1967 some of the fruits of the collaboration were displayed in an exhibition entitled Atelier François Hugo.

The public remained largely unaware of the existence of such platters before the dedicated solo exhibition Picasso – 19 plats en argent par François et Pierre Hugo, 1977, at London’s Lever Galleries and Paris’s Galerie Matignon. The blockbuster exhibition became a major milestone in the artist’s career; not only did it put Picasso back on the map of international stardom several years after his death, but the public debut of the silver platters raised newfound appreciation for the importance of the artist’s non-painting works. Since then, due the demand for the individual platters, full-sets have rarely been amassed or exhibited, and as this unique collaboration is further understood, Masterpiece Art is proud to be able to continue this appraisal.

The exhibition is supported by Ateliers Hugo, Aix-en-Provence, France and the catalogue written by Dr. Clare Finn, author of The Decorative Metalwork of Pablo Picasso; his collaboration with François Hugo, unpublished PhD Thesis, Royal College of Art, London, 2004.

Note: due to Covid restrictions, the exhibition is viewable by appointment only. Entry is free of charge. Contact: [email protected]