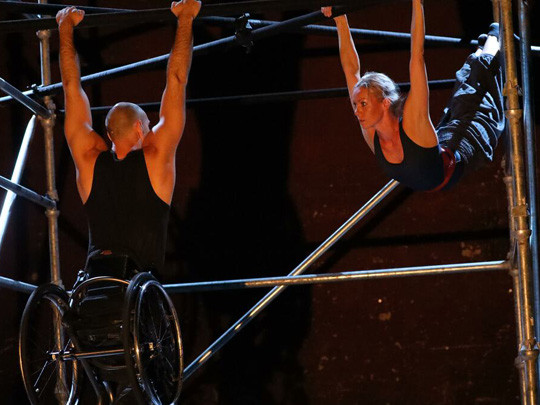 Hypothetically, 111 is the number of vertebrae Mutso and Brown have between them: Mutso moves like she has a hundred, while Brown's spine is fused and he jokes that he only has 11.

Commissioned and supported by Unlimited, celebrating the work of disabled artists, with funding from Spirit of 2012, Creative Scotland, Made in Scotland, The Work Room, Tramway, The Place and Check-It Scaffold.

This film of 111 shows the original production performed at Tramway’s Unlimited in Glasgow 2018.

Since then, the work has been developed, including an additional solo for Eve Mutso, and has been performed around the UK and Georgia. It received a Fringe Sold Out award when shown at Made In Scotland's Edinburgh Fringe programme in 2019.