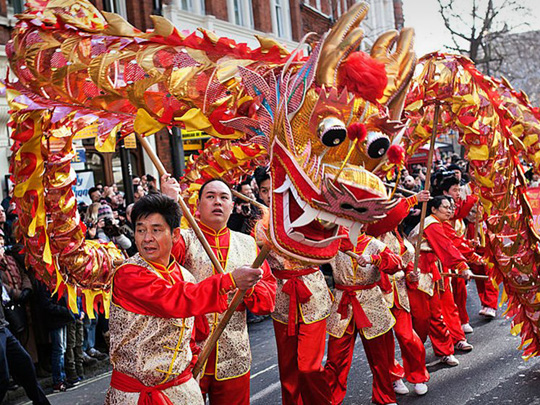 Come and welcome the Year of the Pig as London celebrates Chinese New Year 2019.

The Chinese New Year parade starts at 10am on Sunday 10th February, beginning with colourful parade floats and dragon dances on Charing Cross Road. Between 12pm and 6pm in Chinatown London you’ll find lion dancing, craft stalls, a full range of Chinese zodiac animals and plenty of places to stop off for a Chinese New Year dim sum feast.

The fun in Trafalgar Square often begins with screen shows and a thanksgiving ceremony, followed by firecrackers, speeches and the Lions’ Eye-Dotting Ceremony.

If you’re feeling peckish, experience a taste of the Far East with street food dishes from the stalls lining the square throughout the celebrations.

The finale gets underway with a variety of showstopper performances and a spectacular pyrotechnic display, which lights up Trafalgar Square to mark the end of the Year of the Pig festivities.

Spot up-and-coming British-Chinese artists and Chinese Spectrum radio on stage at the talent and community zone at Charing Cross Road.

Take the kids to the family and children's zone in Leicester Square for cultural activities and family-friendly entertainment.

Head to Chinatown, where you’ll be able to get up close to lion dances and take selfies with Chinese zodiac animals. And sit down for a traditional Chinese New Year meal and festive treats in one of Chinatown’s restaurants.