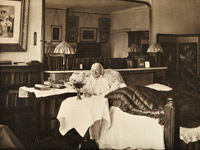 The Audio Tour is available at a cost of £7.99 and is downloadable to an MP3 player or CD

To commemorate the centenary of Florence Nightingale’s death on the 13th August 2010, the Florence Nightingale Museum in South Bank have launched an audio tour that takes listeners through the heart of Mayfair and the locations in London which mark the significant events that took place throughout Florence’s remarkable life.

The tour features an unparalleled commentary of Florence’s years, taking the listener through the streets of central London. The tour includes the house Florence died in on the 13th August 1910, the rooms she christened the ‘Little War Office’ – the centre for her campaign to investigate the health of the British Army - as well as the Perfumery in Jermyn Street which today displays Florence’s letter of thanks for her sweet-smelling nosegay, which she used whilst walking her wards.

As well as allowing the listener to learn about Florence’s personal ties and revisit the parts of London most important to her, the walking tour contains interviews with a variety of Florence experts, including biographer Mark Bostridge and Christine Hallett from the Medical History department at the University of Manchester.

The downloadable audio tour, which was created by Soundmap, is now available via the museum website at a cost of £7.99. The tour also includes a map of the route around central London, which takes a little over an hour.