Stuck in the emotional landscape 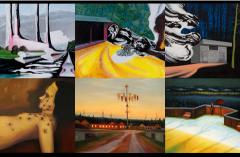 This striking display of paintings connects two established Czech artists who are at the forefront of European contemporary art. Though differing in style and subject matter both Jiri Haushka and Jaroslav Valečka display great talent as well as poignancy in their current practice. Haushka indulges in sinuous forms and shapes; moulding within his works a landscape to his own emotional vision. Valečka on the other hand engages in vast and lonely spaces stemming from early childhood memories spent in the Lusatian Mountains, otherwise known as Czech Switzerland. His works are incredibly evocative, conjuring up a sort of desolate magic that reminds of long lost tales of the vast Bohemian forests. Full of juxtaposing themes this exhibition certainly raises awareness of contemporary art that has its roots in Eastern Europe.

Hauschka, in a very persuasive way connects the tradition of the Czech painting with the context of the international art scene. His work moves on the border of abstract and figurative painting working with stimuli from his surrounding. He gives real objects timeless meaning by generalizing them in abstract shapes. This way he manages to objectify not only figures and objects but untouchable moods and feelings which in his paintings receive tangible physical form. His paintwork is soaked with strong energy and expression. It pulses with an intensive inner charge. It portraits the deeply rooted tradition of the Central European expressionism which played an important part in the paintings of Germany, Czech Republic and Austria already from the start of the 20th century.
Valečka’s paintings seem at a first glance very quietly moody, yet he sais that they portray places he spends time at mixed with his own intense vision of the places he experiences. The Lusatian Mountains know for its vast forests, deserted picturesque villages have deeply influenced Valečka’s artworks. He graduated at the Academy of Fine Arts in Prague and Prague is also his place of residence. However, he spent a significant part of his life in the country, namely in Northern Bohemia. His bond with the dark romance of Northern Bohemia can clearly be identified in the themes of his work and leaves visible marks on the character of his artistic personality. Valečka has never been, nor ever aspires to be an ambitious leader of artistic avant-garde. In fact, the power of his paintings rests in a particular intimacy of his work and also in an exceptionally balanced quality of his artistic production.