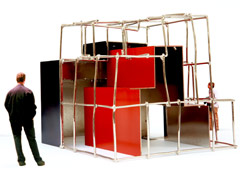 24th June 2011 – 10th September 2012, Berkeley Square, London, W1J 6DB
Internationally acclaimed sculptor Jeff Lowe has been chosen to exhibit a large-scale sculpture in Berkeley Square as part of the City of Westminster’s celebration of the Olympics. Six months of intense work with several assistants has culminated in the largest sculpture Lowe has produced. The sculpture will be craned into the square for the unveiling on the 24th June 2011.