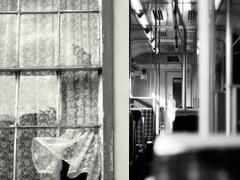 The Burglar Who Failed.
Written by St Jihn Hankin.
Directed by Karima Setohy.
When burglar Bill Bludgeon decides to break into Mrs Maxwell’s house he meets his match – a feisty schoolgirl with a hockey stick. The burglar’s true identity is unravelled and the notion of ‘good Christianity’ is tested. The Burglar Who Failed, by the author of The Charity that Began at Home, will be accompanied by a short play written in response to it by a member of the Orange Tree Theatre’s writers’ group.

Dutchman.
Written by Amiri Baraka.
Directed by Polina Kalinina.
‘I even got into this train... walked down the aisle… searching you out.’ Lula, a beautiful white woman, walks into a train carriage eating an apple. She goads Clay, a naïve black student, and they quickly establish a sexually charged rapport. However the situation deteriorates as Lula and Clay play out the history of their backgrounds within the patterns of American life. The consequences of this chance meeting are catastrophic.