Various venues across the UK 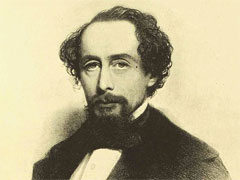 Various venues across the UK

Dickens 2012 is an international celebration of the life and work of Charles Dickens to mark the bicentenary of his birth, which falls on 7 February 2012. Institutions and organisations from all over the world are partners of Dickens 2012 and work together to deliver a programme of events and activities to commemorate this very special anniversary.

Although a writer from the Victorian era, Dickens’s work transcends his time, language and culture. He remains a massive contemporary influence throughout the world and his writings continue to inspire film, TV, art, literature, artists and academia. Dickens 2012 sees a rich and diverse programme of events taking place in the run up and throughout the whole of 2012.

- Dickens and London at the Museum of London, until 10th June 2012
- Dickens on Screen at the BFI Southbank, until 28th February 2012
- A Hankering after Ghosts: Charles Dickens and the Supernatural at The British Library, until 4th March 2012
- Charles Dickens: Life and Legacy at the National Portrait Gallery, until 22nd April 2012


In addition an app has also been released to help you seek out Dickens-relevant points of interest in London. Read more here >>>