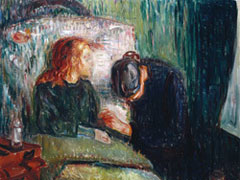 Edvard Munch: The Modern Eye is a major exhibition devoted to a reassessment of the works of the Norwegian painter Edvard Munch (1863–1944). This exhibition proposes a dialogue between the artist’s pictorial work in the twentieth century and his interest in the most modern of representational forms: photography, film and the rebirth of stage production at that time. Munch is often presented as a nineteenth-century painter, a Symbolist or a pre-Expressionist, but here he is seen emphatically as a twentieth-century artist, thoroughly representative of the modernity of his day and age. Organised in close cooperation with the Centre Pompidou in Paris and the Munch Museum in Oslo, this show will feature around sixty paintings and fifty photographs including a selection of the artist’s signature paintings such as Self-portrait. Between the clock and the bed 1940 as well as his own lesser-known photographic and filmic work. The show will also illustrate how Munch engaged with the current affairs of the day, and how he was inspired by scenes he had observed in the street or incidents reported in the press or on the radio.