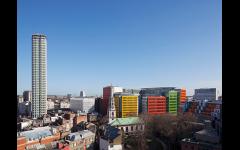 London’s second heartland, encompassing the historical expansion from the seats of power within Whitehall and the City. Here, the aristocratic estates of West London were speculatively developed into the set of Georgian streets and squares such as those of Bloomsbury that characterise this area.

Walking tour, departing from The Building Centre, Store Street WC1E 7BT at 10am