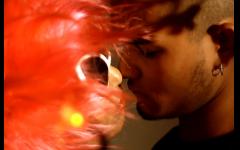 India's most radical director Q delivers a tour de force, which has excited festivals around the world. Twenty-year-old Gandu lives with his single mum in a dingy Kolkata flat. She has turned to sex work to make ends meet. His life revolves around the local internet café where he overdoses on videogames and porn until one day he bumps into Rickshaw, who introduces him to hard drugs and together they slide into a dark fantasy world where angry rap lyrics melt into visitations by the goddess Kali and an alien sex-kitten. Listen out for a stunning music track inspired by the UK's Asian Dub Foundation. The film contains some sexually explicit imagery so don’t bring your mum!

Followed at BFI Southbank by a live onstage rap performance by Q and the Overdose team and special guests.