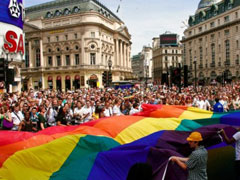 Pride London aims to promote equality and diversity through all of its campaigns. The two week Pride festival uses theatre, music, debate, art and entertainment to raise awareness of discrimination and the issues and difficulties affecting the lives of LGBT people around the world.

This year London is organising and hosting World Pride on behalf of the global lesbian, gay, bisexual and transgender community.

7th July: World Pride Parade
Starting at Baker Street
The theme for this years World Pride Parade is 'One World, One Pride, One Voice' and all parade participants will be reflecting this in their float or walking group.

The World Pride Parade will start at Baker Street at 1 pm and make its way down Oxford Street and Regent Street, moving down Pall Mall and Cockspur Street as it passes Trafalgar Square and continues down Whitehall where it will end at around 4.30 pm.

From 2pm the celebrations start in Trafalgar Square where International artists, performers, activists and speakers will thrill the crowd.