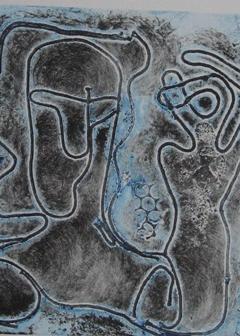 Without Walls is an exhibition of art by people who are, or have been, homeless.

The exhibition is being hosted by The Guardian in partnership with homeless charity St Mungo’s and community arts projects Homeless Diamonds and Cafe Art. The curatorial team was led by Mark, a former St Mungo’s resident, who initiated the project and gave it its title.
Mark, aged 51, said: “Living in a St Mungo’s hostel gave me a physical and psychological space to rediscover painting. I started to paint a lot and the interest the staff showed gave what I was doing an added dimension. Painting became a bridge connecting me to others.”
“I became aware that many creative people lived within the hostel environment. This set met thinking. What if we had a space to exhibit where the work would really be seen? Would it challenge conceptions of who homeless people are? Would homeless people see themselves as empowered? I took the step of approaching The Guardian to inspire myself and other homeless people, to raise the bar on our expectations of what we have to contribute and how it may be received.”

“‘Without Walls’ is intentionally ambiguous. Walls can give shelter, protect or confine. And what of psychological walls and how they support our reality constructs for better or worse? The exhibition is therefore deliberately un-themed to avoid placing the artists in a ‘homeless’ box and better reflect each individual’s choices, interests and perceptions.”

The exhibition is open to the public throughout August in the foyer of The Guardian offices. It will feature work in a range of media by around 30 artists who are currently or used to be homeless.