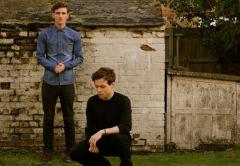 
On Sunday 19th August, singer-songwriters Parnell Page along with West End star Sabrina Aloueche (best known as Scaramouche in We Will Rock You) will host the first ever West End Fest.

LoveCreate, which raises vital funds by holding creative events featuring, music, arts and crafts, has been created in memory of graphic designer and teacher Hayley Dowdell, who died aged 27 from Cystic Fibrosis in November 201. The organisation focuses on donating to both The Cystic Fibrosis Trust and to the Respiratory Ward at the Bristol Royal Infirmary to buy lifesaving equipment in Hayley’s name.

Parnell Page played at the LoveCreate Festival in Weston Super-Mare in July this year and wanted to do everything they could to help:

Richard from Parnell Page said:
“We didn’t know much about Cystic Fibrosis before we played at the LoveCreate Festival last year, but we were totally blown away by the fact that this group of people who had lost their friend to CF had come together and in just over six months created an amazing event to raise money to help others. We loved playing the festival and wanted to continue helping LoveCreate. We are thrilled to be able to produce a London event that will showcase the best of the West End for an extremely good cause.”

Laura Brooks from LoveCreate said:
“As a close friend of Hayley’s, I cannot say enough about how grateful we are to Richard and Jack from Parnell Page for hosting this event to help raise money for LoveCreate. To date, we have raised over £12,000 in just over six months to help those affected by Cystic Fibrosis, and thanks to West End Fest we hope to add even more to this total, which will go towards buying lifesaving hospital equipment.”

West End Fest will bring together talent from a wide number of shows including performers from Rent, Wicked, Les Miserables, We Will Rock You, Hair, Mamma Mia, After the Turn, Billy Elliot, Jersey Boys, Rock of Ages, Dreamboats and Petticoats, Thriller Live, Ghost and Shrek - the Musical. The event will also feature acts from ITV’s ‘Superstar’ and BBC1’s ‘The Voice’ and ‘Over the Rainbow’.