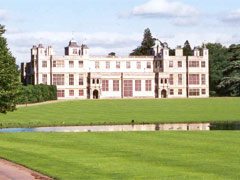 Located just near Saffron Walden in Essex, this is an early 17th-century country house originally called Walden Abbey and given by King Henry VIII to Sir Thomas Audley, who transformed it into his mansion home and renamed it Audley End. Although it is now only one third of the original size, Audley End is still quite large, with over 30 beautifully decorated rooms to explore> The mansion is generally considered to be one of England’s grandest stately homes.

In 1825 the third Baron Braybrooke inherited Audley End House and filled it with pieces of his art collection, such as Holbein and Canaletto paintings. Luckily for today's visitors, these paintings can in large part still be viewed today along with original furniture of the Braybrooke family and reception rooms designed by Robert Adam in the 1770s.

Successive owners of Audley End have not only remodelled and adapted the building’s interior but also the gardens that surround it. The park is now a stunning example of the contemporary ideas prevelant in landscape gardening of balance and harmony. There is also a romantic riverside garden, a parterre garden with its flower beds and paths
that form a geometric pattern as well as a Victorian kitchen garden.