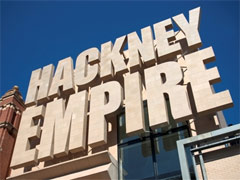 The famous Hackney Empire, now a grade II listed building, was designed by the architect Frank Matcham. In 1901, when the theatre was built, the Hackney Empire was a technological wonder in terms of its electric lighting, central heating and the in-built projection box that it would use. Then owned by Oswald Stoll, it attracted international acts such as Louis Armstrong, Charlie Chaplin, WC Fields, Marie Lloyd and Stan Laurel. The theatre hosted burlesque, reviews, plays and concerts as well as variety shows.

In 1956, the theatre was sold to ATV and it became the first commercial television studios in the country, producing programmes such as „Take Your Pick“ , „Oh Boy!“ and „Top Of The Pops“. In 1963, the Hackney Empire was sold to Mecca and converted it into a bingo hall, much to the disappointment of many locals.

The theatre re-opened in 1986 and was taken over by the C.A.S.T. (Cartoon Archetypical Slogan Theatre), a political theatre company. Later on, Hackney Empire became one of the leading stand-up comedy venues on the circuit.
In 2001, the renovation and restoration of the theatre began and was finally re-opened in 2004 by Sir Alan Sugar (a local lad and one of the primary benefactors!) with a new 60 seat orchestra pit, backstage area with dressing rooms, wardrobe, green room and kitchen, technical offices and workshops.

Today the Hackney Empire once again shines as a leading venue, hosting international opera companies, world famous orchestras, leading touring productions, comedy shows and musical events as well as having its own productions that are taken on tours around the country.