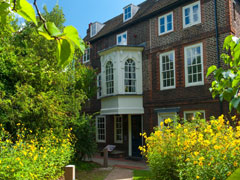 William Hogarth made a name for himself in the 18th century with his satirical portraits and engravings, which almost always adopted strong moral tones. Among his best known works is Gin Lane, a stark black and white work that shows an already deprived society ravaged by the production of cheap booze.

Despite being located in Chiswick, this was Hogarth’s “country retreat” from 1749 until his death 15 years later. Many of the artist’s engravings are on display, and temporary exhibitions take place from time to time. Replica pieces of furniture have been installed, although some original features remain like fireplaces, floorboards, and the mulberry tree, which it is believed has existed since the 17th century.