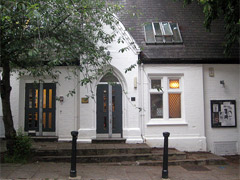 The New End Theatre has a somewhat gruesome past, as the building that houses it was once a mortuary, constructed in 1890. A tunnel connected the mortuary to the adjacent New End Hospital and the bodies of those deceased were transported under the road; today some believe the theatre to be haunted. The building was given a rather more salubrious nature in 1974, when it was converted into a theatre, and it quickly gained a reputation for showcasing the work of up and coming playwrights alongside highly respected artists. Works by Antony Minghella and Bernard Shaw were shown to great acclaim and illustrious names such as Emma Thompson, Judy Dench and Stephen Fry appeared onstage. Nowadays the theatre is just as likely to host comedy and drama as classical music events. With only 84 seats this is one of the smallest in London, allowing the audience members to sit within a few feet of the stage. A café and bar on the premises serves drinks and snacks; there is disabled access and toilets.

Upstairs at the Gatehouse