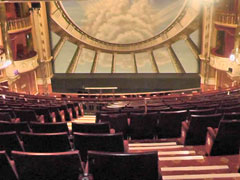 Don’t be fooled by the “new” in this theatre’s moniker, as the venue has been in operation since 1910. Over the years it has hosted legendary stars like Marlene Dietrich (giving her final UK performance), Dirk Bogarde, Laurel & Hardy and more recently Ruby Wax, John Barrowman, and the late Joan Rivers. Prince Charles’ 60th birthday celebrations were even held here with a variety show starring Bill Bailey and John Cleese among others. With a capacity for 1500 it’s easy to see why it’s ideally suited to the big names, and stand-up comedy, musicals and panto make up most of the schedule. In essence, it’s akin to a large West End theatre transplanted to south west London. The theatre’s most profitable show to date is Peter Pan, starring none other than ex-Baywatch heartthrob turned cult/tabloid figure David Hasselhoff.