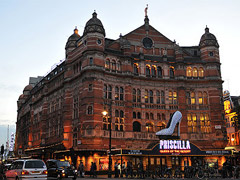 When the Palace Theatre opened in 1891 it was intended to be used as an opera house, specifically for light English opera in the vein of Gilbert and Sullivan. Its first production was Sullivan’s Ivanhoe, and the management spent vast amounts of money on stage sets and cast to ensure it was successful, however not having a wide enough repertory of operas to sustain the theatre, it had to be sold within a year. After this the Palace Theatre began screening films as well as showing plays and musicals, including Fred Astaire’s last musical, ‘Gay Divorce’. More recently it has been the setting for ‘Jesus Christ: Superstar’ and ‘Les Miserables’, the latter running for an impressive 18 years, making it the longest running production of its kind in the world.

Andrew Lloyd Webber purchased the theatre in the 80s, and renovated the auditorium to great effect. From the outside, its red brick façade sets it apart from many other London theatres, and the building was Grade II listed in 1960. With a capacity for 1,400 people it is one of the largest theatres in London.