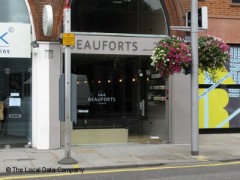 The Latest User Reviews of Beauforts

Vinny is a true artist. I have been to many places but none can colour and cut my hair the way he does it! I asked for the blond highlights and I couldn't be happier with the result. I will keep coming back again and again to that place.

AWFUL SALON!!! I made an appointment (with an extremely RUDE receptionist) three weeks before the date for the day of a very important event. I showed up and THEY WERE CLOSED!! I've contacted them since for an explanation and they never responded. Obviously they don't care about their customer
Added on Mon 13 Aug 2012 at 09:11:18 [report] [respond]
User Rating: 1 / 10

I decided to treat myself to some highlights before my friends hen do so went along to Beauforts and ended up really disappointed. I was unhappy with the colour, and the stylist basically said there was nothing he could do and I had to pay full price. I would never go back there.
Added on Thu 05 Jul 2012 at 09:23:48 [report] [respond]
User Rating: 1 / 10

Michelle, North London
Added: May 2012
My experience of this salon was shocking to say the least. I did use a voucher however, I've never been treated that badly in any salon I've ever been to! I was ignored, bad practices we used, my hair was hacked at, to the point I wanted to jump out my chair and leave. Wish I had!!!

Had my cut and coloured today by the owner Vinny . All the staff are lovely and they made me feel very welcome : )) . I live in north Kent so it's quite a distance to the shop , but I'm so glad I went . I definitely will be going back . Thank you very much , from Lee x

I bought a groupon voucher for the Brazilian Keratin treatment at Beauforts Salon. The staff were very friendly and made me feel very comfortable as I had alot of questions about the treatment. The treatment worked out great. I would highly recommend this salon.

After seeing an offer on Groupon for the Brazilian Keratin Straightening system at Beauforts, I had a look at the Beauforts website and saw that they do 3 different types of hair treatment.
I called them to ask what the main difference in the results would be between the 3 treatments and this could not be answered (even though there is £100 difference between 2 of the treatments).
I then asked them which of the three treatments would be best if i wanted to keep my natural light curl without the frizz as I like natural looking waves was told all three would do that as none of them would actually make my hair straight.
My friend then called them to ask if the treatment would make her hair straight and they said yes it would.
We have been told conflicting things and it seems as though the stylists do not know much about the treatment.
I just called back and was told that the treatment offered on Groupon can achieve straight or wavy hair and that I would have an option to tell the stylist on the day, however it does not say this on the website and I am worried that I was just told that so that I buy the voucher.
The offer on Groupon is tempting as it's a great price and I have heard good things about the Brazilian Keratin treatment but I'm not sure if Beauforts is the best place to go to have it done....

I don't usually write online reviews, but I read a negative comment about this salon on this site, and nearly didn't go there as a result. I had a Brazilian blowdry there this morning, and while i won't see the final results for three days, my experience was a very positive one. Firstly, i arrived almost 20 minutes late as i got lost, but they were totally fine about it. i was also using a groupon voucher, but they were most welcoming to me. They made me a peppermint tea, and got cracking. What i really liked about their method was the two guys worked on my hair simultaneously. it meant that a process which should probably have taken two hours, only took an hour and a half. they were super nice, played good music, and let me read my magazine in peace. I also had a lovely head massage when they washed the product out. the other really good thing was they didn't charge me the extra £10 even though my hair is long and thick. in terms of recommendation, i can't comment on their cutting or colouring skills as i didn't have that done, but they gave me a great blowdry in super fast time. when i got into the office, lots of people admired my do. i'm giving them 8/10, and only deducting 2 points because they didn't really talk me through the after care (which i know from a previous brazilian blowdry), but it would probably be important to clarify for someone undergoing the treatment for the first time.
Added on Fri 16 Mar 2012 at 14:01:25 [report] [respond]
User Rating: 10 / 10

I am really surprised from the previous review as my experience is completely different.
From the moment you walk-in at the salon you feel great positive vibe from the atmosphere. I have very delicate curly troublesome hair and had tried many salons but the satisafction was not complete. At Boufort's I have tried two stylists and they are equally brilliant. They listen exactly what your requirements are than they communicate their thoughts and the result are perfect.
If you want to be sleek and chic I will highly recommend this place.

This place is dreadful. I should have realised when the person who was to cut my hair was available and I could just walk in. I have very thick hair and requested that it was not thinned and that I would have enough hair to tuck behind my ears. First of all the chap cut my hair without wetting it (my hair was not clean) and then proceeded to thin it. He then suggested that he wouldn't wash it after he cut it. I came out of the shop nearly in tears and had a good cry afterwards as I look as if I have got mange and it is so badly cut. Nothing I had requested had been done.
Dreadful, dreadful, dreadful experience.
Added on Tue 15 Dec 2009 at 12:09:45 [report] [respond]