How to shoot a film in London

We investigate the pitfalls and pleasures of using iconic London as your film backdrop... 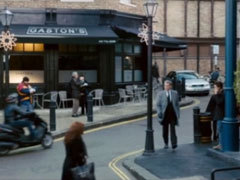 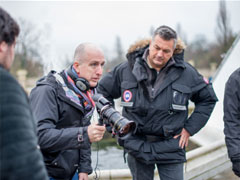 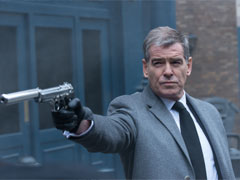 The latest action blockbuster to hit our screens is Survivor, a post-9/11 caper starring Milla Jovovich. She plays an American woman working for the US embassy in London who becomes a fugitive from the law and the target of Pierce Brosnan’s assassin. According to director James McTeigue (of V for Vendetta fame), making a film “in the middle of London in the winter is a big challenge.” So just how does a film shoot create explosions and tense action in the drizzle, amidst the huge crowds and legal wrangling?

Filming in the rain

Oh the London rain, it ruins picnics, Wimbledon matches, and it can make filming hugely inconvenient. Sometimes it can work to your advantage – would the final scene of Four Weddings and the Funeral be the same if it was a boring sunny day? But on a more practical level, you need to protect your equipment. For Survivor, McTeigue talks about standing “under a 20 foot sheet of plastic trying to manipulate a scene”, as cameras and lighting gear need to be sheltered from water. Buy rain covers for when you’re not shooting, check your camera’s specs in terms of seals (i.e. all the bits around buttons and slides that water can get into) and take a large umbrella to hold over it. Some tripods even have attachments for this, but if you don’t have one get practicing how to balance a brolly in one hand while holding your camera in the other. \n\n

The horror film 28 Days Later required scenes of an empty city devastated by a deadly rage-inducing virus, so Danny Boyle and his team filmed at weekends from 4 am for a couple of hours at a time when the streets were at their quietest. As this was a big production, they had to enlist the police to help them close down roads, but they also got crew members to politely ask clubbers if they could take a different route home. Boyle’s tactic was to ask women in the team to do this,assuming people would be more receptive to a female.

If you do get the police to stop traffic for you bear in mind you’ll probably only be able to film in short spurts in busy areas. In V for Vendetta the scenes shot by the Big Ben and the Houses of Parliament could only be filmed between midnight and 4.30am, and traffic could only be stopped for four minutes at a time.

Or rather, beware of capturing people on film without their consent. Get written permission from anybody who could be identifiable on camera, even if their face is obscured but they can be identified in other ways. If this isn’t possible, put up a written warning in a clear font so passers-by are aware filming is taking place and the camera-shy can stay away. And stay away from filming sensitive scenes, as no one wants to be filmed coming out of an STD clinic.

Even if you’re changing the significance of a place (see Battersea Power Station as the Arc of the Arts in Children of Men),to film inside someone’s property you have to get permission from the owner, and this even applies to the inside of a flat owned by the council or housing association; as well as the tenant,you’ll need to ask them.

Many mansions and stately homes can be hired, but obviously there’ll be a fee attached, and often for a princely sum. For instance in the 2012 James Bond movie Skyfall, M attends a funeral at the Old Naval College, one of London’s grandest buildings. Somewhere like this is likely to cost you tens of thousands of pounds, particularly if you film over several days. However if you don’t have the budget for Christopher Wren’s architectural masterpieces it’s fortunate London is filled with smaller, but also stunning period constructions. The National Trust run many beautiful houses such as the Tudor-era Sutton House, and their filming rates start at £150 an hour. Also consider getting creative with locations; parts of Tinker Tailor Soldier Spy were shot in a disused army barracks in north London as it was cheaper than paying to film inside buildings. \n\n

What about other outdoor spaces?

You’ll generally need as permission from the council of the borough you’re filming in and – you guessed it - there will also be a cost. Each council has their very own Borough Film Services department who are your first point of contact for filming outdoors. They’ll tell you where you can and can’t film, and whether you need to inform the police (for example if a road needs closing).

Unfortunately “public” spaces like the Royal Parks (that includes the main big ones like Hyde Park and Regent’s Park, as well smaller ones like Brompton cemetery and Grosvenor Square Gardens) are privately owned and managed. There’s a fair bit of bureaucracy to get through if you want to film here, and even if you’re making a student film you’ll need written permission and a letter with headed paper from your college or uni. There will also be a fee attached.

What about that other most iconic of settings, the Underground?

Here too you will need to apply online for a permit, and it will cost £500 an hour to film, more if you need to use an entire carriage. At the time of writing filming on buses isn’t allowed unless you hire a ‘lookalike’ bus, which you can get complete with driver.

Survivor is out now on general release. 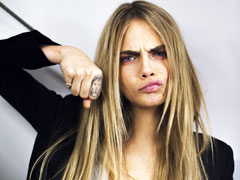 Our favourite London personalities
It’s that time again for the AIL List, where we pick our favourite people of the moment.