Publication season for the various restaurant guides is upon us once again. We keep you up to date with the winners and losers of the capital's dining scene, and most importantly how the new guides have affected the All In One Ultimate Restaurant List. 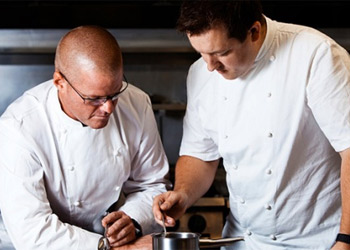 The first publication of the year has been by Harden’s, accompanied by their announcement that London restaurant prices have leapt a staggering 11.1%. This claim was criticised by Fay Maschler of the Evening Standard as “their annual bid for media coverage of their newest guide” leading to a rather public war of words. This all seemed rather self-defeating as the fallout caused even more column inches on the London based guidebook. Within the results of the guide itself there were a few changes at its top. Brett Graham’s The Ledbury has been voted best food in London, stealing the crown from Marcus Wareing who held the title from 2008-2011. Furthermore Michel Roux Jr’s Le Gavroche has also claimed the capital’s best overall restaurant from Marcus, who has slipped to 7th overall.

Next off the guidebook conveyor-belt was the Good Food Guide 2012, this year bereft of any mention of the word gastropub - no longer relevant according to its editors, who will “call a pub a pub”. The national guide has again placed Gordon Ramsay at Royal Hospital Road as London’s highest scoring restaurant, although dropping it from 2nd to 4th place in their top 50. High new entries include Pollen Street Social and Dinner by Heston Blumenthal, scoring 8 and 7 respectively, with the impressive Ledbury increasing its score to 8 out of 10.

To round off the September releases Zagat, fresh from their sale to internet behemoth Google published their London guide earlier than expected. The American restaurant-reviewing giants backed up Harden’s claims of price rises in the City, but put their figure at 6.3%. However, their research found people eating out with a greater regularity, indicating a thriving restaurant scene. The Ledbury’s stellar year continued, picking up the award for best food, Dinner by Heston scooped best newcomer.

Unsurprisingly the publication of this guidebook triumvirate has affected the All in One Ultimate Restaurant List, including some high profile fallers: Maze, possibly suffering post-Jason Atherton and Nobu at Berkeley Street seem to have let their standards drop. More dramatically Bonds, Notting Hill Brasserie and York & Albany have dropped out of the top 100 completely. Within the top 10, Gordon Ramsay’s eponymous restaurant at Royal Hospital Road has been knocked down from 4th to 8th.

There has been a spectacular new entry by Dinner by Heston Blumenthal straight in at number three. The most hyped opening of the year has delivered, and is riding high in the All in One Ultimate Restaurant List thanks to the plethora of prizes Ashley Palmer-Watts and his team have accumulated. All this even before the influential AA and Michelin guides hit the shelves in October. Other notable new entries at 36 and 37 respectively are Michelin starred Gauthier Soho, headed by the instinctive Alexis Gauthier, and The Glasshouse in Kew, from the Nigel Platts-Martin stable of fine dining eateries. Dishoom, Apsleys and Brawn close out the new entries inside the top 50. Further big climbers include the tenacious Trinity with Adam Byatt at the helm, rising an impressive 25 positions, and under the guidance of ex-Rolling Stones chef Sanjay Dwivedi, Zaika climbs 16. Lastly some old culinary hot-spots are perhaps finding a new lease of life, with The Ritz and Scott’s both climbing over 15 places.

Keep checking back in the coming weeks to find out how imminent October guide releases continue to shape the All In One Ultimate Restaurant List of where to eat in London.

Back to All In One Ultimate London Restaurant List >>>