The All In One Ultimate Restaurant List Interview: Brett Graham 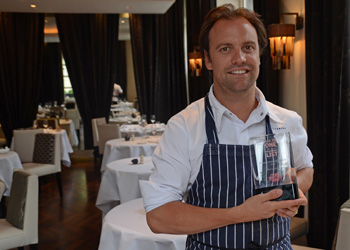 For the second year in a row, the Ledbury has topped the All In One Ultimate Restaurant List. Located on the very chic Ledbury Road, Head Chef Brett Graham has led the restaurant to great success since it opened in 2005. It has two Michelin stars, a score of 8/10 in the Good Food Guide, and three AA Rosettes.

Graham also runs the Harwood Arms along with Mike Robinson and Edwin Vaux, London’s only Michelin-starred pub. Did they have an inkling it would become quite so successful? “No. We did not set out looking for accolades. I have great business partners and we had a clear idea of what we wanted for the Harwood. We are very proud of it."

The Ledbury was the brainchild of restaurateurs Nigel Platts-Martin and Phil Howard, who Graham first worked for at the Square, and who he says he has learnt the most from in his career. His favourite restaurants are pizzeria Franco Manca in Chiswick and the very upmarket Zuma in Knightsbridge.

What are his predictions for the year ahead? “I see more and more restaurants growing their own produce at the moment, and also home brewing, we are currently doing a bit of that here!"


This article is connected to The Ledbury
Share on