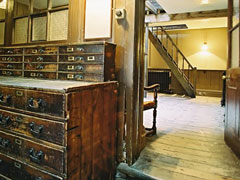 This Grade II-listed house was initially founded as a museum for immigration and diversity, the first of its kind in Europe. This is fitting given that the Spitalfields area, where it’s located, has had one of the greatest influxes of immigrants to London over the decades, including Jewish, Huguenot and more recently Bengali refugees. The house itself was once owned by a family of Huguenot silk weavers.

Inside there’s a replica of a 19th century Jewish synagogue and a permanent exhibition that explains the story of the capital via the diversity of the people who have arrived here. In order to preserve the building’s fragile condition it’s only open a few weekends a year, however it’s possible to book group viewings in advance.