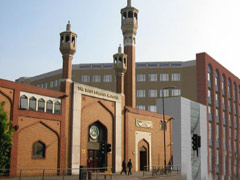 The East London Mosque was initially located on Commercial Road, where it opened in 1941, however the decision to build a mosque was made in 1910, to service the city’s growing Muslim population. It moved to its current premises on Whitechapel Road in 1985, but during occasions like Eid and Ramadan the mosque would become so crowded it was necessary to purchase adjacent land, and the extension called the London Muslim Centre was unveiled in 2004. Together the buildings cater to more than religious needs, as among the services offered are Islamic studies for both children and adults, prayer sessions, nursery for kids and advice sessions for the unemployed. The centre is open to people of any age as well as non-Muslims, and there are various rooms which can be hired for meetings, conferences and weddings.