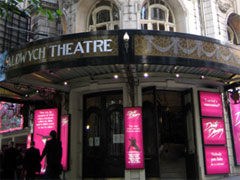 The Aldwych Theatre was built by Seymour Hicks and in conjunction with Charles Frohman, an American impresario. The design of the Aldwych Theatre was by WGR Sprague and was finally completed in December 1905. An Impressive painted Act Drop was used until the 1930s and the Theatre still retains much of its original charm, although refurbishments have meant the lower stage blocks were removed and the Gallery became part of the upper Circle. A redevelopment scheme put the Theatre’s existence under question in 1958 and again in 1959. It wasn’t until 1960 that the Theatre was finally saved after it was taken over by the Shakespeare Memorial Theatre as their headquarters for the next three years. During this period a new apron stage was built at a cost of more than £75,000.

Between 1925 and 1933 the Aldwych was home to a series of farces by ‘Ben Travers’ which became known as the ‘Aldwych Farces’. Performing these pieces were renowned comic actors such as Tom Walls and Ralph Lynn. The ‘Aldwych Farces’ included ‘Cuckoo in the Nest’, ‘Rookery Nook’ and ‘a Cup of Kindness’. During the sixties and seventies when the Aldwych was home to the Royal Shakespeare Company as well as many remarkable performances of Shakespeare’s works- the Aldwych staged very successful productions of ‘The Wars of the Roses’ and ‘Nicholas Nickleby’.
In more recent years the Aldwych has shown Joan Collins in Noel Cowards celebrated ‘Private Lives’. The award winning production of ‘An Inspector Calls’ was also performed here at the Aldwych Theatre. More recent productions include The Tina Turner Musical.