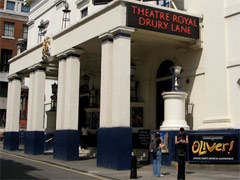 The Theatre Royal at Drury lane has been the site of a theatre since 1663, although the original Theatre was destroyed by fire in 1672. Two years later a new theatre was built on the site and remained there until it was demolished in 1791. Three years after the demolition a new theatre was built, but was once again destroyed by fire only ten years later. The fourth incarnation of the Theatre Royal at Drury Lane is the same building that exists today.

Designed by Benjamin Wyatt, the current theatre was opened on 10th October 1812, with a capacity of more than 2,200 over four tiers. A portico was added in 1820 and a striking colonnade was built eleven years later.

Over the last one hundred years the Theatre Royal has become associated with some of the most lavish and exuberant musicals ever staged in London. ‘Cavalcade’, Noel Coward's musical extravaganza, had a massive cast of over four hundred members filling the stage, which is over eighty feet deep!

The list of musicals staged at the Theatre Royal is one of the most prestigious in the world including ‘Miss Saigon’, ‘Oklahoma!’, ‘Carousel’, ‘South Pacific’ and ‘My Fair Lady.’

The unparalleled history and number of significant shows staged surely makes the Theatre Royal at Drury Lane one of the most important working theatres in the country, and possibly the world. Owners LW Theatres embarked on a huge £60 million refurbishment and restoration in 2019, to bring the theatre back to its 1820 glory days, and to expand its facilities to include new dining facilities, improved access, more comfortable seating and more ladies toilets (yay!!).