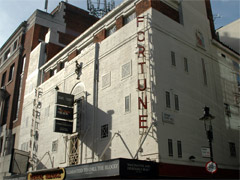 Edit listing
Covid 19 Information
Due to COVID-19, we are sorry to confirm that all performances at Ambassador Theatre Group venues across the UK have been suspended until Sunday 2 August.

The Fortune Theatre opened in 1924, the first theatre to do so after World War I. It was built in a classic Italian style and is very small – its 432 seat capacity makes it one of the most intimate theatres in London. The building was Grade II listed in 1994 and now that the original Wembley Stadium has been demolished, is the oldest remaining building in London made solely out of concrete. Having been privately owned till 2001, in this year it was sold to the Ambassador Group, who also owns the Savoy Theatre.

The Fortune Theatre’s first production was entitled ‘Sinner’s, a play which ran for only two weeks. During World War II the theatre was used to entertain troops. Since then many famous names have graced its stage, including Dame Judi Dench, Dirk Bogarde, Peter Cook and Dudley Moore. The theatre is perhaps best known for its production of ‘The Woman in Black’, a play that has been running since 1989 and celebrated its 5,000th production in 2001. A Japanese version was even staged to commemorate 150 years of Anglo-Japanese relations.