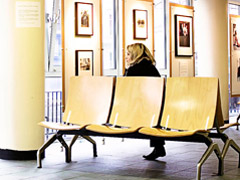 Built as a tribute to founder of the Scouting Movement, Lord Baden-Powell, Baden-Powell House is now a Scouting hostel as well as a conference centre in South Kensington. The house is owned by The Scout Association primarily for accommodation purposes, but also to house some Baden-Powell and Scouting memorabilia including the original Baden-Powell painting by David Jagger and Baden-Powell's ‘Last Message to Scouts’.

The building committee purchased the building in 1956, and employed Ralph Tubbs to design the house in the modern architectural style. The Scout Movement itself provided the largest part of the £400,000 cost. The Foundation Stone was laid in 1959 and the building was opened in 1961 by Queen Elizabeth II. Refurbished several times over the years, the house now provides affordable, short-term accommodation for Scouts, Guides, and their families.