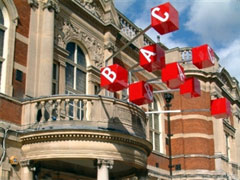 The Battersea Arts Centre is housed within a grade II listed building on Lavender Hill Battersea. The building was built in 1891 by EW Mountford and was originally Battersea Town Hall. For more than 70 years the building was used as council offices. The 1963 London Government Act dissolved Battersea into a section of the Wandsworth Borough and the Town Hall was no longer required. In 1967 the council announced that the Victorian Facade to the building was to be demolished. Local resident campaigned for the plans to be scrapped. The council agreed that the building would survive- providing it was used for the community. The building was converted and in 1974 opened as an Arts centre, to the delight of local residents. The centre offered classes and lectures on the Arts. The council decided to close the centre in the midst of a string of expenditure cuts around the borough. Once again local fervently protested. The decision was made that the council would partially fund an Arts Centre at the site. In 1980 the BAC was born. The building was heavily renovated and three theatres, two studios and many Arts facilities were installed. The BAC received great praise and interest from the community and excelled during its fledgling years. The BAC has become one of London's premier fringe venues and it also involved in physical and experimental theatre