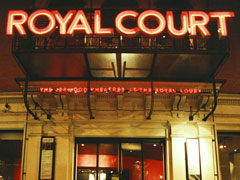 The Royal Court Theatre is the home of the English Stage Company. The English Stage Company is committed to encouraging new writers and showcasing their work. The New York Times recently described it as "the most important Theatre in Europe". Every year the Royal Court Theatre runs a competition where the best piece of writing that they receive is performed by the group in Sloane Square. The first Artistic Director of the English Stage Company was George Devine in 1956. It was Devine's aim to make the writer the most important component in a production and not the actors, production costs or venue. This new approach earned quick success with John Osbourne's "Look Back in Anger" a huge success. The Royal Court Theatre was only a 400 seat venue and unequipped to deal with its own success. Some of the productions that began here were taken on to the larger theatres of the West End. The Royal Theatre recently underwent a renovation costing more than £25 million. The performing and seating areas have been increased. The two performance areas are the Downstairs- the main stage. The Upstairs is now one of London's leading fringe theatres. Throughout the success of the venue the values of George Devine have upheld- though the Theatre has now extended its horizons past the UK and now receives writing from all over the world. 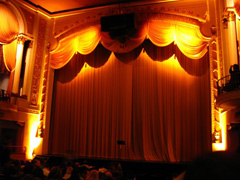 Some call the Royal Court ‘London’s coolest theatre’, some say that it is the modern home of new writing. What is undisputed is that the theatre is always likely to entertain its audience. Promoting new plays and new writers, the work of the Royal Court has also been taken around the world as the venue’s star continues to rise.