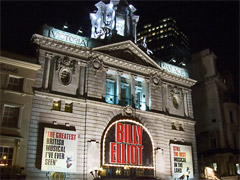 The Victoria Palace Theatre has existed in various guises since 1832, and luckily the building, with its distinctive cupola and ballerina, retains much of its original character. The ballerina figure was in fact a model of Anna Pavlova, who was too superstitious to ever look at it and would draw down the blinds in her car as she approached. The figure disappeared mysteriously before World War II, some speculate that it was melted down to be turned into bullets during the war. A golden reproduction of the original was installed in 2006.

Having initially opened as a music hall, the Victoria Palace Theatre has a history of staging musicals, including, somewhat controversially ‘The Black and White Minstrel show, which ran for 10 years until 1972. More recently it has hosted box office smashes such as ‘Grease’, ‘Fame’ and ‘Billy Elliot’. As with most theatres, you can catch a show for around £20 if you’re prepared to squint throughout the performance, alternatively a premium stalls seat will set you back almost £100 per person. If you’re looking to combine your theatre experience with a meal, some of the local restaurants offer pre-theatre set menus that won’t cost you a fortune.