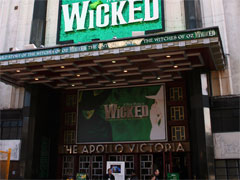 The Apollo Victoria Theatre was built by E Warmsley Lewis and WE Trent, first opening in 1930. Originally built to house a massive scale cinema called the New Victoria Cine Variety Theatre, a stage was built in front of the screen as it was common place to perform stage shows before a cinema screening. The building is a highly distinctive and prime example of Art Deco architecture rising majestically into the London sky.

The Apollo Victoria seats more than two thousand patrons at any one time. The building is now grade II listed.
The cinema at the Apollo Victoria Theatre closed in 1975 and remained closed for six years. In 1981 the venue reopened exclusively for stage productions the first of which was a spectacular Shirley Bassey music concert. In the same year Petula Clarke famously played the starring role in a successful production of ‘The Sound of Music’. In 1982 dancer Wayne Sleep made a significant impact for his part in ‘Dash’. ‘Fiddler on the Roof’ was staged throughout 1983 to mark a very successful era for the Apollo Victoria Theatre. In 1984 the Apollo underwent some reconstruction to accommodate Andrew Lloyd Webbers musical ’Starlight Express’. More than one thousand seats had to be removed to make way for the roller-skating rink and much of the auditorium was painted black.

‘Starlight Express’ ran for more than seven thousand performances before closing in 2002. The theatre was then briefly closed in order to restore the theatre to it former state. Most recently, Wicked The Musical has been showing at the Apollo for over 14 years, making it the theatre's longest running show ever!