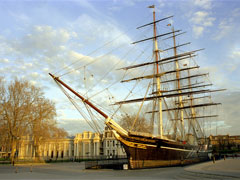 The Cutty Sark was built for John Wills to be the fastest ship capable of sailing the perilous route from England to China to collect tea. The design of the Sark was a streamlined and more agile version of another ship called ‘the Tweed’. The original boat builders were driven into bankruptcy by Wills' high demands; the project was finally completed by William Denny and Brothers in 1868.

Launched in 1867 the Cutty Sark was admired for its 17 knots top speed and reliable and maneuverable design. The Cutty Sark performed extremely well during the tea runs, which it carried out until 1877. In 1885 the Sark was given a new route, the extremely hazardous trip to Australia to collect wool.

It was the Cutty Sark's fantastic performance at this route that really showed it was the fastest ship of its day. The Cutty Sark was lost in 1895 when it was sold to Portugal; it was 27 years later that the ship was spotted and purchased by Captain Wilfred Dowman. The ship required some restoration and was then donated to HMS Worcester as a training ship for cadets.

The Cutty Sark has finished sailing and is now moored on the Thames as a living museum complete with a gift shop and a complete exhibition of its previous life as a cargo ship.

A visit to the Cutty Sark is suitable for the whole family; meet one of the crew members to get a taste of life at sea, take the ship's wheel and learn how to steer the mighty Victorian tea clipper across the waves, and hear about other magnificent ships that have played important roles in the past, with one of the well-informed and enthusiastic guides. 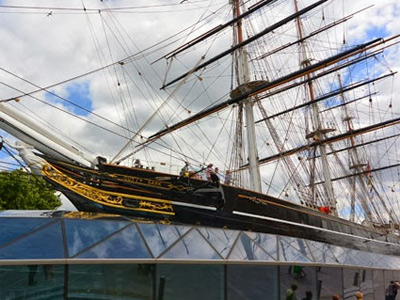 Eat below the hull of a boat

Looking up never felt so strange!