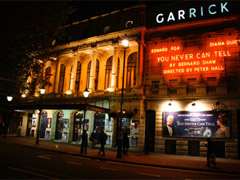 The Garrick Theatre was built in 1889, and named after David Garrick, a famous Shakespearean actor. One of the West End’s smaller theatres, it seats 656, however before the top level was closed it could seat over 1,000. In the late 60s the theatre was at risk of being torn down due to a proposed redevelopment of the Covent Garden area, however a successful Equity campaign prevented this from happening. As with various other West End theatres, the Garrick closed down during World War II, but reopened in 1941. It has since undergone a couple of renovations, but the famous gold leaf auditorium remains.

The Garrick Theatre is best known for staging pantos and comedies such as ‘No Sex Please, We’re British’ and musicals like ‘Bad Girls: The Musical’. Like the Apollo Theatre, it was purchased by Andrew Lloyd Webber in 2000 before being sold to Nimax Theatres in 2005.