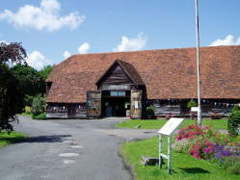 Harrow Museum offers a glimpse into the historic past of the area, with displays that feature ancient farming equipment and industrial tools. The four buildings that house the museum date back to circa 1310 and are Grade I listed; they are surrounded by the oldest moat in existence in the Middlesex. It is clear that the manor was owned by wealthy inhabitants, eventually falling into the hands of Henry VIII who then sold it to an esteemed member of his court. The many owners of the manor added extensions and alterations to the buildings over the years, however the former granary and barn buildings have retained many of their original features, with a permanent exhibition in the barn explaining the development of the estate. Temporary exhibitions also take place throughout the year which focus on local life and achievements. Private tours of Headstone Manor can be arranged, from a ghost tour of the ancient site where sightings are explained (or not!) to a peak into what life would have been like here in Medieval times. Admission is always free, and there is a café on the premises providing refreshments. The museum has different opening times according to the season, but is generally open every day with the exception of Tuesday.