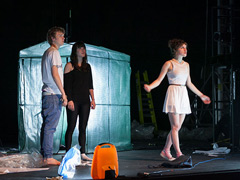 This Hammersmith theatre is something of a veteran. It’s been open on its current site since 1979, however the Lyric was in fact it was first established at the end of the 19th century as an opera house.It’s staged works by the likes of Sir John Gielgud and Harold Pinter, and is certainly one of West London’s best loved theatres today, counting Joanna Lumley and Janet Ellis to name just twohigh profile supporters.

The Lyric also run Secret Theatre, whereby ticketholders are unaware of the play they will be seeing until the night, performances could be an adaptation of a classic or a brand new work.
There’s a café on the premises serving pizza and the rooftop offers alfresco dining, while also benefiting from a quirky design that was named one of the world’s most enchanting public gardens by Elle Décor.