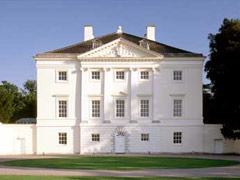 Marble Hill House in the London Borough of Richmond upon Thames is the last complete example of the elegant 18th century villas and gardens that nestled alongside the Thames River between Richmond and Hampton Court. Its construction began in 1724 for Henrietta Howard, mistress of King George II. The house and gardens were planned by great names of the day including Lord Herbert and the poet Alexander Pope, who was a neighbour at Marble Hill!

Marble Hill is set in 66 acres of riverside parkland, and was designed to become a retreat from the hustle and bustle of 18th-century London. The interior of the house is (perhaps surprisingly) fairly compact for a huse of this nature. The house centres around the 'Great Room' on the first floor where Henrietta Howard held court. The interior contents amd furnishings have been restored and reassembled in recent times. Many of the original contents had been dispersed and sold in 1824, but as part of the restoration process were gathered together again inasfar as was possible from afar afield as the United States and Australia.

Today, Marble Hill House is also used as a wedding venue as well as being home to a series of wonderful picnic concerts in the summer months.

Marble Hill House is open to visitors from the end of March to the end of October on weekends and bank holidays.