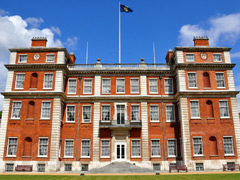 This Grade I listed building was designed by Christopher Wren, commissioned by the Duke of Marlborough for his wife, Sarah Churchill. Red bricks from Holland were used in its construction, and the lavish mansion was finished in 1711. Marlborough House would be the residence of various aristos and royals over the years, including King Edward VII and King George V, but in 1959 Queen Elizabeth II donated the house to the government for it to be used as a Commonwealth centre. It then became the headquarters of the Commonwealth Secretariat when it was established several years later. The house still contains many paintings, tapestries and objects owned by its former inhabitants, and the gardens are equally impressive. To visit you will have to book a guided tour; alternatively it’s usually open to visitors for the annual Open House Weekender.