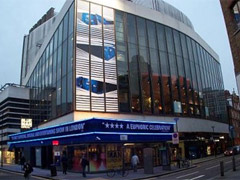 The New London Theatre was built on the site of old music halls and taverns, therefore the location had been known for entertainment since Elizabethan days. It was officially opened under the name The New Middlesex Theatre of Varieties in 1911. Plays by Arthur Miller and P.G. Wodehouse were staged, and the music for many of the productions was composed by George Gershwin, however some of the plays lost money and the partnership responsible for running the theatre dissolved. It closed down in 1959, and would not reopen until 1973.

The first production the newly opened theatre showed was in fact a television broadcast of Marlene Dietrich’s show. It then went on to stage the musicals ‘Grease’ and ‘Cats’, before being used to host snooker tournaments and the BBC’s ‘A Song For Europe’, where a UK entry for Eurovision was chosen. More recently the theatre has hosted plays by Chekhov and Shakespeare, ‘Joseph and His Amazing Technicolour Dreamcoat’ and ‘War Horse’.

The New London Theatre, situated close to Covent Garden, has a capacity of 960 split over two levels.