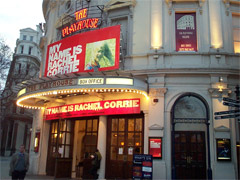 In its early days, the Playhouse Theatre – then known as the Royal Avenue Theatre – hosted comedies and burlesque, before turning its hand to dramas and later on live music. The BBC took over the building in 1951, and the next few years saw The Beatles and The Rolling Stones perform here. After the BBC left the theatre was empty for almost a decade, until it reopened with the musical ‘Girlfriend’. The theatre was bought by maligned novelist and politician Jeffrey Archer in 1988, but has since changed hands.

The Playhouse Theatre has hosted Shakespeare productions, musicals such as ‘The Rocky Horror Picture Show’ and ‘La Cages aux Folles’ and dramas like ‘The Postman Always Rings Twice’ and ‘Les Liaisons Dangereuses’.

There are four bars – one on each level – and attendees can purchase ice cream and confectionery. Tickets cost between £20 and £50 depending on where you sit, the website helpfully explains which are the most awkward seats and where to get the best view from (for instance, aisle seats from rows B to H are to be avoided as metal poles can get in the way).

Reviewed by T.A.O
I really like this classic old theatre. The stalls gave us a great view of the action. However, the long of leg should steer well clear of the upper balcony where friends found it more than a little cramped.

And drink in a local pub rather than the bar - it's a pricy as any theatre in London!