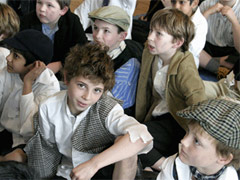 The Ragged School Museum was opened in 1990 and is housed in three warehouses on Copperfield Road. The site was formerly owned by Dr. Barnardo and was previously the largest ragged school in London. Campaigners battled to save the site from demolition in 1983; this led to the formation of the Ragged School Museum Trust. It was this organisation that maintain the Ragged School Museum. Dr. Barnardo rented the buildings on Copperfield Road in 1876 and converted them into the Copperfield Road Ragged School. The school educated poor local children, gave them two meals and helped them find employment. Each floor was fitted with a fireplace and converted into large scale classrooms. The basements were used as the childrens play areas. By 1879 the Copperfield ragged School was the largest of the 144 throughout London. The Museum is a unique collection of items which chronicle the history of the Ragged School institution and give an insight into the history of London's East end. Because of the sheer volume of objects within the collection, various exhibitions are rotated and stored. It is worth contacting the museum if you wish to view specific displays. The Museum is run by a diligent group of volunteers and is largely financed externally- though donations will be gratefully received.