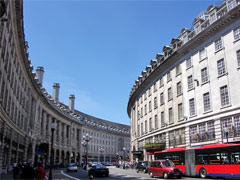 Regent Street runs proudly from Pall Mall in the south, through Piccadilly Circus and Oxford Circus and Ends at Langham Place to the north, and remains a prestigious address for many international brands. Like so much in this area the street was designed by John Nash.

The street was designed to be used as part of a ceremonial route from the Prince Regent's residence at Carlton to Regents Park, where 56 villas and a Palace were to be built for the Prince, though only eight villas and no Palace were ever constructed.

The building of Regents Street meant that many slums were cleared and the street acted as a border between Soho and the more affluent Mayfair. Just north of Piccadilly Circus a structure known as the Quadrant was built with a magnificent colonnaded facade. Very soon Regents Street became known, not only for its splendid design, but also for the array of shops with the world famous toy store Hamleys and quaint department store Liberty still there today. Liberty was opened in 1875 and sold fine silks and many prints, some of which were designed by celebrated artist William Morris. The Liberty of today is considered to be at the highest level of women’s fashion.

At the beginning of the twentieth century the Café Royal at number 68 was one of the most fashionable places to be seen London.