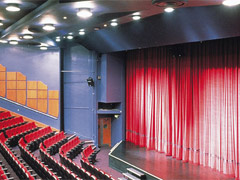 Named after famous playwright, novelist and critic George Bernard Shaw (1856-1950), the Shaw Theatre is located near to Euston Road next to the British Library and St Pancras Chambers.

The theatre first opened its doors to the public in 1971 as a purpose built theatre within the St Pancras library. The Shaw is well–known for its funded regional theatre productions. It is constantly hired by independent theatre companies and is popular with New York based producers.

After extensive refurbishments in 1998, the theatre now has 446 seats and two large foyers, a bar serving drinks and refreshments.